Ride to the end of Europe!

Thessaloniki to Istanbul ... A few words from the road...

So, the end of the road was reached. After 6 years of epic riding, 6 years of incredible exploration of some of Europe’s further flug reaches, we arrived at the Turkish border, as a more worldly wise crew of riders, than we had set out. Some had transformed their cycling, some had transformed their bikes,
Some had even learned how to mend a puncture on this ride across a continent.

As the huge white crescents fluttered on their red backgrounds overhead, we entered Turkiye, and pedalled towards our first set of towering minarets. Paul and Jason avoided a full body examination at the border, and trundled through to join us at the roadside, where we had been greeted by the Turkish Police. Immediately bristling with some misplaced sense of guilt, another sense of guilt overtook us all as we realised that the only reason the police had stopped was to wish us ‘Hozgeldniz’ – or welcome to Turkey. The chief of police for the local area, who was driven by his junior around the border complex, offered us an escort to Edirne, our first overnight. ‘Is there anything else I Can help you with?’, what a fantastic first impression of this bustling country!

From the border, the town of Edirne is just a short ride. Comfortably within an hour we had crested the final hill, and the enormous main Mosque marked our evening’s destination. The sense approaching a new continent here in Turkey is palpable, people’s faces are different, the air is laden with the smell of different spices, and the spires of churches have now been replaced with slender space rocket minarets. But the biggest thing that hits home as we ride through to Edirne, and then Corlu and on to Istanbul, is that this country is firing on all cylinders.

Somehow under the radar, Turkey has been marching forwards on its own economic wonder journey. But it was something that few of us in our cycling group were aware of. We fumbled for Wikipedia over the next three evenings here in Turkey as we rode closer to Istanbul, to find out more about what is happening. Firstly, the small road that I had taken from the border to take the quiet road to Istanbul some 13 yrs previous, has now been replaced by a smooth tarmac dual carriageway, which runs perfectly parallel to a big motorway just a few kilometres away. And as we pulled in to Corlu the next evening, we already had a sense of coming into range of Istanbul, at a distance of well over 100km from the city centre.

After Corlu, on the final day’s ride to our destination, we had a few short kilometres of countryside, before soaring towerblocks, gleaming hi tech factories, and ostentatious retail and hotel developments engulfed our progress. We had tried hard to plot a way through the madness on quieter routes, but the bottom line is, that Istanbul is the 8th largest city in the world, and is a city well and truly on the move, so cyclists had better be intrepid to cope with what it is going to offer! We crossed two causeways, where we were obliged to follow the D100, our guide towards Istanbul for the last 2 and a half days, the latter one  being gridlocked by traffic, before we gasped for breath and took a sharp exit down towards the coast once again.

We reached lunch on our final day easily, and were treated, as we were throughout Turkey, to some most fantastic fare. Turkish cuisine, for the uninitiated, is with out doubt one of my personal favourites, laced as it is with good hearty flavours, complimented by simple but exotic spices. We were able to take our time over lunch, and enjoy a full range of freshly prepared kebabs, fluffy middle eastern rice, lahmacun Turkish flat bread topped with tomatoes and herbs, and delicious pastry stuffed with Turkish cheese and potato. For a simple roadside spot fronting on to the roaring D100, it was somewhat surprising to be fed such a gourmet feast. By the time we remounted our two wheeled transport, we were well and truly stuffed. And of course, as everyone quite accurately predicted, directly after lunch, as is traditional, we were greeted with the steepest hill of the whole trip.

The good news, however, was that this was the final hill for us, and from here we soon found ourselves riding a pleasant coastal cycle route, enjoying the fresh air wafting in from the Sea of Marmara. This route in for the final 20km, is a beautiful ride, and after looking straight out at the enormous numbers of cargo ships anchored just offshore, our eyes, on rounding the final headland are drawn to Turkey’s Mediterannean Jewel. Finally, we see the distinctive domes and spires of Sultanahmet. We gather by the water’s edge for a team photo, and pedal the final couple of kilometres into town. Up one last steep cobbled street, and we emerge miraculously beside the Blue Mosque. In fact, we actually emerge inside the blue mosque complex, and the celebrations begin. Big hugs, stiff handshakes, and slaps on the back. The team are to be congratulated… no crashes… no incidents, just great riding, and good times…

Just one question remains. Where are we going next year? You tell us... info@adventure-cafe.com !!

Posted by Challenge Leader at 12:17 No comments:

Still The Adventure Capital for Me!

Somehow 8 years have elapsed since I was last lucky enough to find myself here in Nepal. Life rolls along, and we have been riding through most of Europe, trekking in the Atlas Mountains, and blasting out the UK mountain challenges.We have even in the intervening years developed and grown fond of our close to home multi activity events, where challengers can blend everything from Open Canoeing to Caving , Orienteering to Rock Climbing, and even Abseiling and Mountain Biking. Our events have taken us from the wildest peaks of North West Scotland, to the backroads of Albania, and from the caves of the Mendips to the Sea Cliffs of Cornwall. Indeed, we are fortunate and blessed to have all of these amazing places to count as our playgrounds. But although time may have dulled some of the memories, the Himalayas still offer the real deal, and they remain, in my mind, the true Adventure Capital of the World. 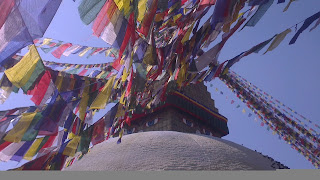 This last 2 weeks has seen a lucky group take up on what has to certainly count as one of my all time favourite adventures. We have spent 2 weeks, exploring the religious and cultural sites of the Kathmandu Valley, then putting our best foot forward on the Annapurna Sanctuary Trek, and reaching the crystal clear air of the Base Camp at a lofty 4130m. From the moment we arrived, I wondered whether the team would share my complete and utter (some might even say obsessive) fascination with this country! I watched as we bumped our way throught the dusty unsurfaced roads of Kathmandu. I wondered as people were served with Dhal Bhat, and Noodle Soup for meal after meal. I feared the worst as the temperatures plummeted high into the sanctuary, and our breath steamed forth from our mouths in the lodges each night. But last night, as we ate our last celebratory meal together, and the team relived their experiences, it was obvious, that even for this well travelled team, the tried and tested recipe that Nepal offers, still has the old magic. 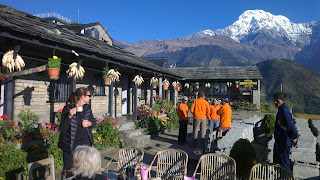 The best big Adventures always start with a bang. Coming to Kathmandu even the flight in is very special, with the snowcapped Himalayas glistening behind Nepal's capital city. And once the group had assembled, we were straight off, directly into the melee of the city centre - the team immediately struck by the energy, colour, and frenzied chaos of Kathmandu rush hour! 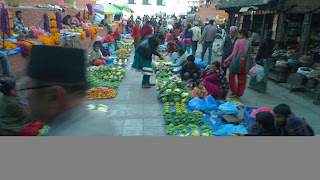 Within 24 hours of touching down, the team had flown to Pokhara, transferred to Naya Pul, and were well on their way up towards our first overnight in Ghandrung. And then within a couple more days, we had trekked through beautiful forests, amongst lush green rice paddies, and up to the entrance to the narrowing valley tha﻿t leads to the Annapurna Sanctuary itself. Life has changed a fair amount here in the last 17 years since I started coming to Nepal, and the lodges have become in the lower parts of the valley like hotels in the mountains. Each major stopping point on the trek now has hydro electricity, and the trails are beautifully maintained. As it turns out, the inhabitants of Kathmandu with its dusty unsurfaced and dirty roads are probably somewhat jealous of the Gurung folk from the Ghandrung Valley! 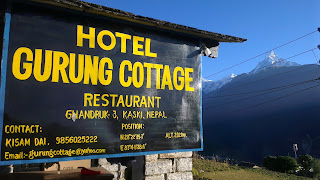 As we reached night 3 of our compact trek, some of our team were starting to feel the pace. Having by now climbed to 2950m, we were perfectly positioned to head up into the higher part of the trek. Himalaya Hotel for us marked the start of the more challenging part of our trek, as the temperatures were by now dropping steadily, and the air had started to thin. And added to this, the lodges by now have become simpler. The virgin trekkers in the group were starting to find out what Himalayan trekking is all about! Simple living, plenty of Lentils, and incredible scenery... but dwindling creature comforts!

As we continued higher the night at Himalaya really paid off, as we were comfortably able to ascend to 3700m at Macchapuchre Base Camp, with all team members reporting no headaches ! Hurrah! But most team members feeling very chilly... as the temperature dropped to a bracing minus 7 degrees (est.﻿)...

At four forty five on morning 5, we all leapt out of bed, ready in our trekking gear, gloves, hats and headtorches poised, and strode forth into the chill night. Beneath a blanket of stars we climbed slowly towards our final destination, excited chatter filling the night air. Around five thirty, we were able to descern the beautiful turning of the sky's edges to a lighter shade, and the first brightening of Hiunchuli up ahead. Just a few minutes more, and the torches were off, and fiery sunshine hit the snowcapped peaks of Annapurna South. We took our final steps into a bustling Base Camp, and enjoyed hot porridge and lashings of lemon tea. Photographs will never do this place justice, memories will burn brightly forever... I can't wait to be back again...

This trip was 13 days from London to London - please call www.adventure-cafe.com for more details on 01460 249191 - and we shall be very happy to arrange your very own amazing adventure to the Annapurnas!

Posted by Challenge Leader at 07:30 No comments: 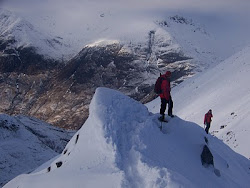